On this website we use our own (first-party) and third-party cookies to collect statistical information about your browsing activity, to personalise your experience (e.g. language), and to personalise the ads you see based on your preferences, in accordance with the profile based on your browsing activity (e.g. any websites you have visited). You can accept all cookies by clicking “Accept and continue browsing”, or configure or block them by clicking “Change cookie settings”. See our Cookie Policy for more information.

You can change the parameters that affect the cookies we use.

Pujol 100 PVB+, ten years of a landmark that transformed the laminated glass industry

We celebrate the 10th anniversary of the development of the Pujol 100 PVB+ lamination oven which represented a turning point in the way of understanding the laminated glass industry.

On year 2011. Pujol was celebrating the centenary of the company, the engineers received the premise, and the challenge, of developing a reliable, flexible lamination solution capable of adapting the production of laminated glass to the curves of the market, without the need to increase the cost per unit and also maintaining a stable profit margin, regardless of the demand that the company was. That was the key due the macroeconomic conditions; companies were then severely hit by a major crisis in all markets, similar to the one we are experiencing today.

The proposal launched to the market, was Pujol 100 PVB+. The good reception was the best guarantee; more than 50 units have been sold around the world since its launch.

Pujol 100 PVB+ was developed and designed to help the professional in PVB lamination and avoid having fixed expenses, especially energy, being able to laminate without installing a climate-controlled room with humidity and climate control, without calendering and reducing the total investment in machine. The system, in addition to complying with an ecological standard that makes the deduction such as R + D / IT viable, avoids unnecessary risks, such as explosion, something that can happen with the autoclave system.

When the glass processor uses EVA films, the oven works with a high-speed Fast Curing system that allows carry out productive cycles every 40 minutes at full load, achieving productions of more than 1,000 m2 per day depending on the model.

Pujol 100 PVB+ incorporates Pujol e-Connect as standard. It is an advanced system that has made possible adapt the Pujol ovens to Industry 4.0. In addition, it offers interesting functionalities: real-time connection to the oven, the possibility of receiving remote technical assistance and secure connection from any external device with internet access (mobile, tablet or computer) or having a traceability of the production process. With these characteristics, the glass processor will have greater control of what happens at all times with his oven, achieving greater comfort and peace of mind.

Pujol 100 PVB+ provides even higher levels of production, incorporating an assembly line that has been developed to automatize the manufacture of EVA / PVB laminated glass. Thanks to it, the costs are reduced and the quality of the laminated product is increased by squaring them automatically without the operator making a great effort. The line can also be fully adapted to the characteristics or the layout of the workshop through three possible configurations. This versatility makes it easy for any glass processor to install a line of unmatched features.

At Hornos Industriales Pujol we know that each client has unique needs. Our engineers have worked on interesting projects over the last ten years, among them there are different unique cases that deserve to be highlighted. An example is one of the last installations that we have done in Val y Val, a glass processor company with a great tradition and experience in Mexico. Here we opted for a Pujol 100 PVB+ oven equipped with an extra bending chamber, thanks to which, together with the great benefits of the oven, they have been able to carry out important projects. 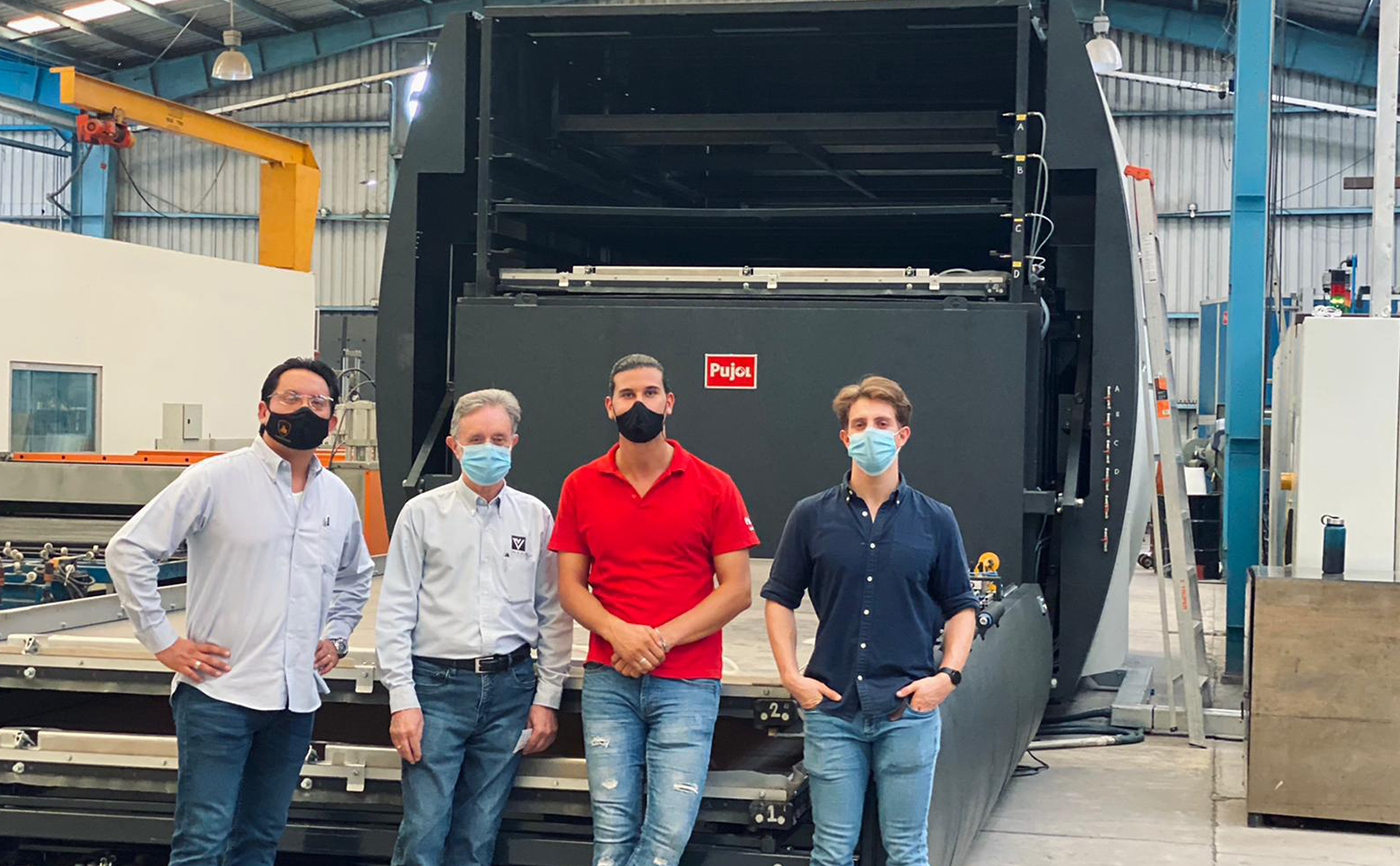